UNIONS ARE LEGALLY ALLOWED TO LIE TO THEIR MEMBERS, SAYS NLRB 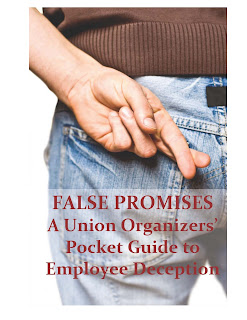 We conclude that the Union did not violate either section 8(b)(3) or 8(b)(1)(A) by misstating the Employer’s final contract proposal at the ratification meeting because that vote was wholly an internal union matter, nor did it violate Section 8(b)(3) by failing to execute the proposed final agreement because the contract proposed by the Employer differed from the contract ratified by the employees. [Emphasis added.]

While appalling, the ruling is unfortunately consistent with previous NLRB rulings that allow unions to mislead workers.
Posted by Dienekes at Tuesday, June 09, 2009